Following on the [high] heels of the Chanel ‘Little Black Jacket (LBJ) exhibition with its beautiful space, hang and of course the wonderful jacket images, it got me thinking about that other icon of wearable cultural aesthetic. I speak of the other LBJ – the ‘Little ‘Biker’ Jacket’ celebrated by Mick Farren, iconised by Brando, and worn by any [wanna-be] outsider. As All Saints  presents the Biker Jacket as the ‘must wear’ item for the Autumn/winter season, the LBJ will once again carry the cultural package from over 50 years of ‘cool’.

The ‘Biker jacket’, that well used generic term, yet this garment has more signifiers than Dan Brown’s Mona, and yet explains nothing of the complexity of visual connotation, – so lets deconstruct it. For a start there is the biker jacket that ‘us’ men wear – the type (though perhaps not the make) that Daniel Craig may care to wear. It has a nice fit and is smart/casual. Most times it never gets to go on or near a motor cycle, nor does it cover a tattoo on our neck. Then there’s the biker ‘gang’ jacket, the ‘club’ jacket is the same but different. The difference between the two is if you are willing to brawl for it. This is what separates the men from the boys, but boy can we sublimate. The gang jacket comes with patch ‘colors’, the club LBJ comes with a logo, our ‘biker’ jacket comes with cleaning instructions.

Sonny Barger – one time spokesperson for the Hells Angels, recalled his friend Boots (Don Reeves) creating a ‘patch’ by modifying an old air-force patch with a skull wearing an aviators cap with a set of wings back in 57. However, it seems some sort of 100th monkey or critical mass was talking hold across the States, as it wasn’t long before Boots and Barger bumped into other bikers wearing similar ‘colors’, who said they had been wearing them since 48. Some of the most imaginative and stylised jackets came in late 50’s and 60’s including those by the British Rocker. The hand painted images, adorned with studs and gave off a whiff of menace – a must for the image. The yanks didn’t and don’t do a bad job with their designs either, what with the Gypsy Jokers, and other bike gangs who have an artistic freedom, and of course those great early individualised Angel patches. This individualised creativity ended for the Angels around the early seventies with an almost corporate look, I guess they were looking for a global cohesion and a unified front.

There is a ‘type’ that can get away with wearing the biker jacket [well].

T. E. Lawrence got away with it with his Belstaff, not quite the classic biker shape but… Lawrence gets [biker] icon status from riding a Brough Superior SS100 motor cycle, then sadly losing his life on it. Of course the LBJ has come stuffed with connotation and meaning for over half a century now, and we know what it means and most times it means business. A large part of this longevity is of course how it looks and feels to wear something with that bit of edge. As with the Chanel LBJ, I’m not sure if it is height, frame, or just the way some people stand that can pull off that cool style, but thank God it’s not just the tall and lean who can get away with it. John Travolta is a tall handsome guy, but he is not Peter Fonda – which just goes to show you don’t have to be tough either – it’s just that ‘thing’. Roger Federer does look good wearing his leather for the Credit Suisse ad, sitting on that fantastic bike, but he tennis racket on his back – really? Hunter S Thompson wrote a wonderful, fair and balanced book about the Hells Angels, which I must say is pretty damn rare, almost put his finger on that elusive charismatic poise. It seems the great Gonzo was touching on that cool pose that can be seen on every catwalk, runway and mag shoot even today, some 40 years after he wrote the book.

He tells of a cool drifter type with a

… [and the] long boned bodies that never looked quite natural unless they are leaning on something’. 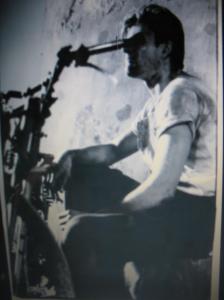 We have had Marlon at Hollister, Fonda’s Captain America, and God knows who else wearing the LBJ that sort of hit rock bottom with Fonzie. Why on earth did John Beverley and the Clash ever think they needed to wear such a thing? Plus the fact that Sean Bean (in Caravaggio) didn’t wear one is truly offensive.

Billy Duffy, the guitarist from the Cult wore a great LBJ for the video shoot for Edie [Ciao Baby], and is a top end example of how to this cultural signifier is worn – this guy was made for this look. The main thing about the jacket is that it has that feel of authenticity, and carried off by Duffy with style and confidence – perhaps that’s the key.

The gay community gave rise to the 80’s inversion of the look, which perhaps frightened off any straight guy getting his stud kit out.

That is, if you need to ask you are not going to get it anyway.

So what of us mere mortals who don’t do studs, whose blood races at Born to be Wild, and the growl of an old Indian bike – can we still be cool? –Sure we can. Ok, perhaps we would rather not slug it out with Boots or Barger, but we can always go lean on something.